On February 23, 2001 a Notice of Meeting was sent to certain interested parties in Terrace by the Prince George Power & Sail Squadron with regard to forming a Squadron of Canadian Power & Sail at Terrace. This meeting to petition CPS was held on March 21, 2001 at which time we elected our first Bridge in advance of becoming a Chartered Squadron.

We received our Charter on June 23, 2001 at a ceremony attended by D/C Josie Ross, A/P Gordon Springate, S/Lt. Gary Shannon and Barry Smith. There were 52 members and quests present for the ceremony and potluck dinner.

Our original Bridge was as follows:

Shortly thereafter John Simmons moved to a different location and Ron Anderson took over the duties of Training Officer.

Our First boating class began in a well-equipped classroom at Northwest Community College in September, 2001 with completion on November 26. There were 16 students at this our first course. D/Lt/C Norm Headrick came from Vancouver to invigilate the final exam. To honour our first class we held a dinner and Graduation Ceremony at the Cadet 747 Hall on December 1 at which 52 attended. A Christmas hamper of 4 full boxes was donated and sent to the Salvation Army for distribution.

Our squadron entered a float in the Terrace Riverboat Days parade in August 2001 to introduce ourselves to our community. Since then we have entered floats in this parade and in the Christmas Santa Parade on December 7, 2002 we entered the ' Santa Cruiser ' complete with enough lights to cause a brown out. 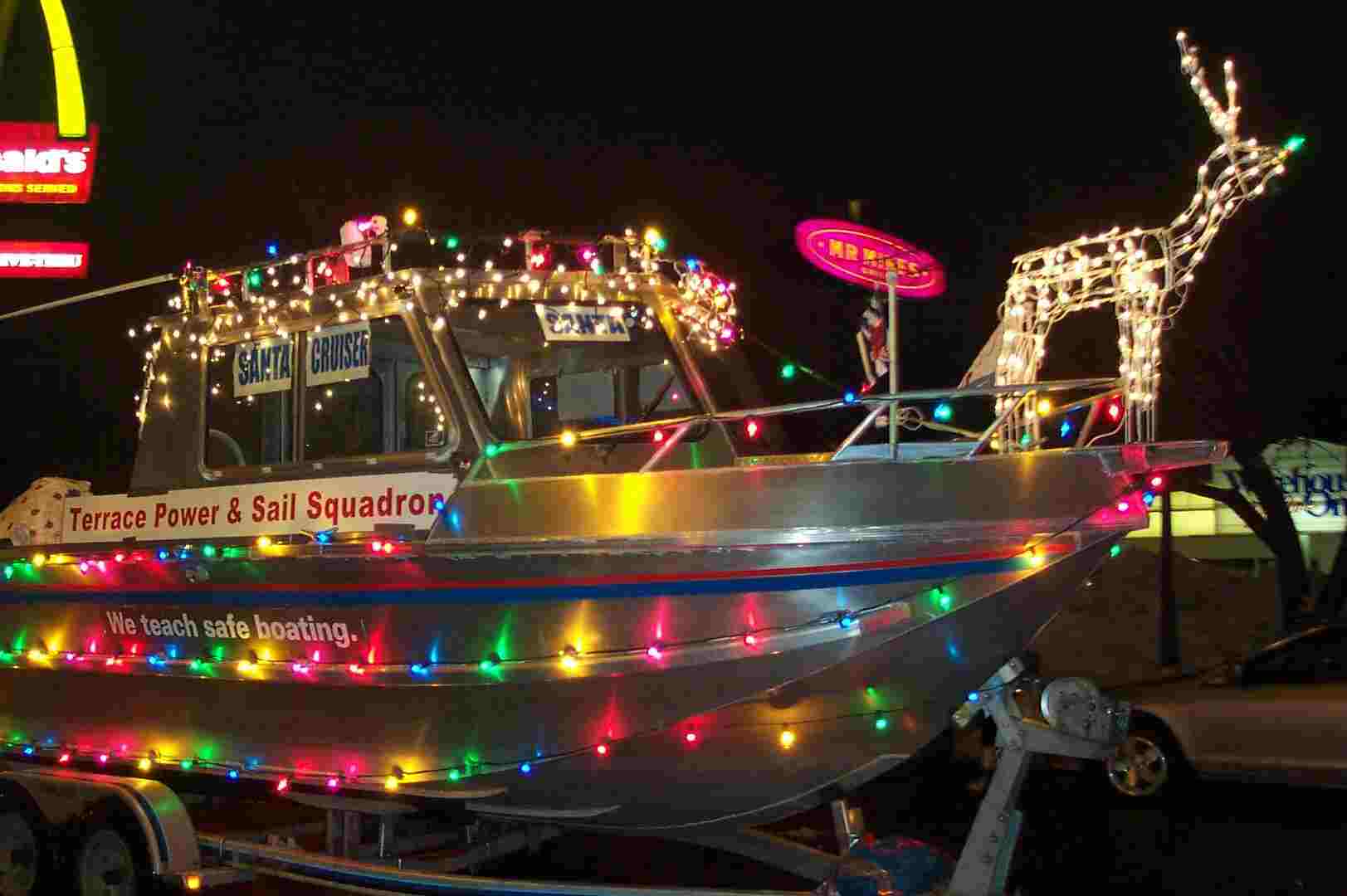 Jim Steele, Ron Anderson, Don Hall, and Dave Newman became VHF instructors after taking the qualifying course. The first of these courses took place in April. All these courses were well attended with almost all of the students graduating. Mr. Steele and Mr. Hall have passed away.

March 17, 2011 the squadron was seriously looking at folding. There was very limited interest in bridge positions. The commander position was becoming vacant with no volunteers to take on this position. At the Bridge meeting Carol saved the squadron by encouraging Gerald to put his name forward as Commander for the next term and her name as a follow up for that position when Gerald's term is completed. This is one of the major milestones for the Terrace Squadron.

We are young and growing. Between Sept 2001 and April 2003 we have had 202 people registered in the Boat Pro, CPS Boating and VHF courses.

Our Burgee depicting a Kermode Bear, fish, rivers, forests and mountains was approved by National CPS in time for our December 7, 2002 General Meeting and dinner. It is very picturesque and was available to members for $20. Jim Steele arranged to have them made up and as an extra had special CPS hats made with an imprint of the burgee, which sold for $10.

In March 2003 Erich Streckenbach created a Web site using his telus web for the Terrace Power and Sail Squadron. Jim Steele was behind the motion of creating a web site to provide information and boating/safety news to the Squadron members and the general public. The site also provides contact information.