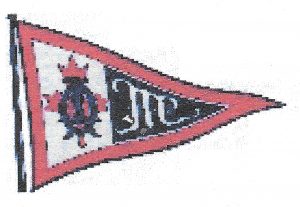 We are Quebec’s first Squadron and proud of it after over 60 years of service to the boating community. We are very proud to have been so instrumental in initiating safe boating instruction in this area. We have even had one CPS Chief Commander from our Squadron (P/C/C E.T. Renouf, who was also a Commander of MPS in 1952). We hope that many lives have been saved through our efforts to teach boating safety. During the intervening years many other Squadrons have spun off from Montreal, including Lake St Louis and Ville Marie. In 1964 a new Squadron was formed in Trois Rivieres with the help of instructors from Montreal Squadron. Our Squadron burgee was developed by the late Cdr/Ret Douglas Pull several years ago. It says “Quebec 1 & M.” or Quebec / First / Montreal.  Montreal Squadron has  no affiliation with any yacht club or other such club, although we very often use their facilities for a teaching venue due to our member’s local affiliation. Schools or any such space is also often used as we are looking for the lowest cost of operations (we do have to pay rent), as these costs must, in turn be passed on to our students. All instructors are volunteers who offer their time and their costs of transportation etc. to pass on the knowledge that they have amassed over the years by their operation of their own vessels as well as that learned through CPS.